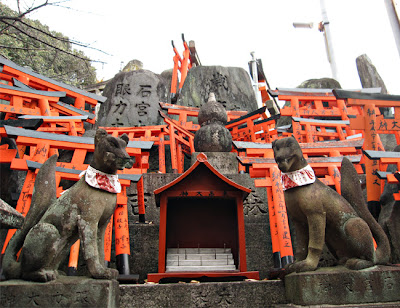 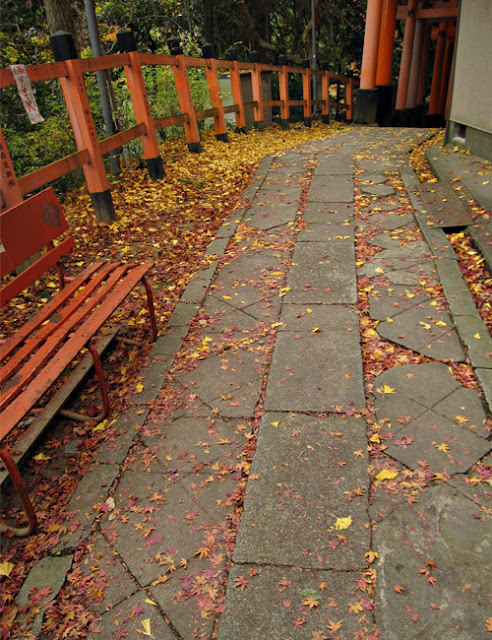 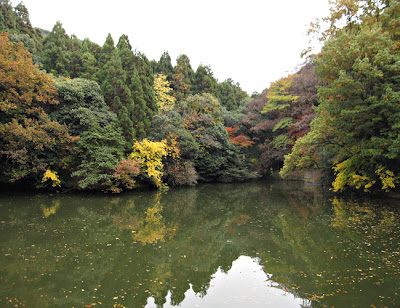 after a hike around the Fushimi Inari mountain (for cultural background, WIKI), there was mind-boggling tofu-based ice cream (豆腐ソフトクリーム tofu sofuto kuriimu) 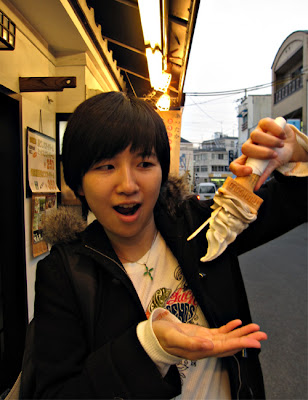 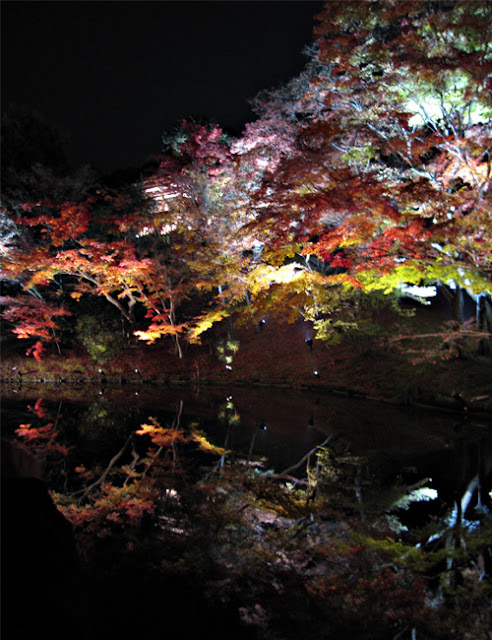 Fushimi Inari is easily accessed by taking the 京阪 Keihan line towards Kyoto and getting off at the 伏見稲荷 Fushimi Inari station. 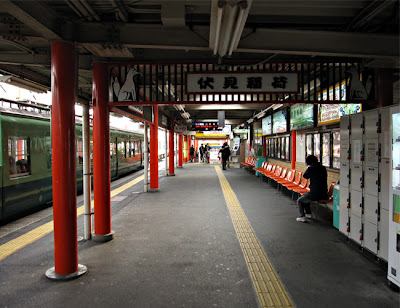 It'll be pretty obvious you're at the right station. :)
Take Exit 2 (出入り口２), walk down towards the bigger street, and then head east down that street.
Less than a block down, among the small shops on either side of you, there'll be the tofu ice cream shop (if you're headed east, it's on your right side, I think...doing this from google maps by searching "fushimi inari taisha, japan", not from memory haha).
Sadly, I can't help you get to any of the other places; it would take too much text and frankly, I don't remember.  This entry is, after all, a year after the fact. :P

Of course, the key to a good trip is not so much location (though that certainly matters)...
but good company. :) 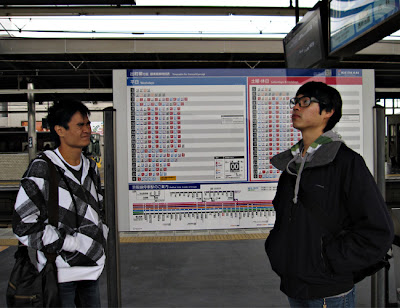 Ahh, I'm not in Japan anymore..
in fact, it's already been more than half a year since I last was. 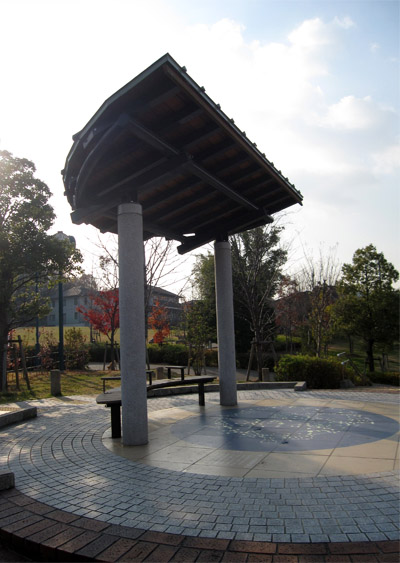 Between Seminar House 4 and the cemetery nearby, there's a small neighborhood park.
In that park there is a terrace (it took me way too long to find this word), with a covered bench area.
On the pavement in the center of this terrace is a star chart and a short description of the Tanabata 七夕 story.
I sat here a few times, mostly at night, maybe once in the afternoon.
Each time was pleasant, in its own way.
I wonder how it would have been, today, in the sticky heat of summer, as opposed to the remembered chill of fall and winter.
Posted by Unknown at 11:55 PM No comments:

exactly three months since I've come back to the USA from Japan.

I was only in Japan for about four months, so the time since my return is steadily growing closer to exceeding the time I actually spent there.  (Which is sort of negligible, considering that my previous twenty years of life were all spent outside of Japan.  anyway.)  I'm pretty used to being back at Berkeley now...not totally, but much closer to before-study-abroad than where I was in my last post.

Lately, a couple people have said to me things like, "good thing you went to Japan last semester, eh?" or "aren't you glad you came back for spring?"

Who could've foreseen the enormous earthquake that hit on March 11?

It's Japan, so earthquakes are kind of a given...and I'm from California, where earthquakes are also not-so-surprising...but a 9.0?  With aftershocks ranging from 5.0 - 7.5?

from the news sources I've read through, though...in spite of all the terrible things--nuclear threat; inhospitable climate (ex: snow); lack of gas, food, and shelter; people stranded far from home and loved ones; death; suffering; too much to list...--Japan has been prepared for disaster, and that has saved lives.  Buildings that have been earthquake-proofed; alert systems; improvements in government response compared to the last huge earthquake (Kobe); a culture that seriously respects and values community; stories of individual and team heroism, narratives of hope spread through social media like Twitter/Facebook/etc and also through traditional news outlets.

Japan's people have suffered and many are still suffering, ten days later.  It's the greatest national crisis since World War II; recovery is going to take a while...a lot longer than ten days, or even ten months.  And what defines "full recovery" anyhow?  I don't know...

Honestly, and for reasons beyond physical safety, I am glad to be home.
My heart flies back to the people in Japan, though, especially those in the Tohoku region, but definitely to all affected by this quake.  And I wonder, a bit, at how different my study abroad experience might have been if I'd gone this semester, or stayed over from fall.  How is everything different because I am seeing it from the outside, from overseas?  What is it like being there, seeing from within?  I cannot really know, and I'm not sure exactly how much I should try...

All sorts of distances and divisions separate me from Japan.
But these are all overcome by shock at the enormous loss of life, sympathy for those who suffer, our shared humanity, and hope.  Hope that is inspired by great examples, large and small, of those contributing to relief efforts and recovery; hope that is inspired by how the Japanese government has adapted its strategies and learned lessons from past disasters; hope that, through this difficult time, people will emerge with greater love and value for one another.

Recommended donation sites: Global Giving, Red Cross
other people have already made the persuasive arguments for why giving money is an effective way of helping.  These links are just here as an option.  In my opinion, they are a good option.
Posted by Unknown at 12:37 PM No comments:

no matter what kind of person you are, whether one who deals well with change or not-so-well, whether emotionally insensitive or a big softy, whether you actually "felt" changed by your time away or not,

re-adjusting back to life at home is not going to happen immediately.

Because you won't just be re-connecting all the friendships you physically disconnected when you left for study abroad (yeah, yeah, there are Facebook, and e-mail, and Skype and so on, but it's not the same), you will also be re-figuring your connections with all the new friends you fell in love with abroad (repeat previous parenthetical point).  Both of those things take time.

"make new friends and keep the old,
one is silver and the other gold."

well, I don't know how the composer of that couplet determined when new things became old, but
you're all gold to me now.

I've been home for more than a week and made not a single bit of progress in catching up on this blog! :D

Study abroad is over.

And then, "real life" begins after graduating from school...

And then, that might not feel real enough, so "real life" might not start until I get married and have kids...

At this rate, when will I ever enter real life?!

All of that, and right now, is a whole lot more "real" than the future I can't predict or control.

2010--hard times though there were, may I always remember it as a seriously God-blessed year.

"One (feat. Ji-Sun)" by Epik High is a prettttty cool song.  I just looked up the lyrics, conveniently found a translation, and ummm, gosh, I think I'm going to need to re-read this a few more times before I understand...

BUT the point is:

I always knew the end would be difficult, but...oh, this is ridiculous. ;-; 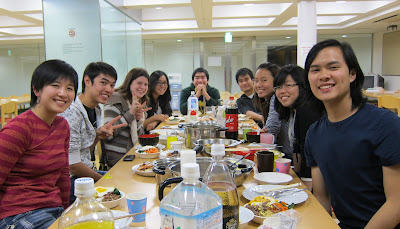 ♥ Our Christmas/Holiday/Goodbye/Final Family Dinner ♥
I won't say that there's nothing good about good-byes (ha, just look at the name!)...but [no words left to properly express how I feel]...

it suddenly got suuuper cold these past few days (single digits, in celsius, admittedly still positive numbers), but according to tenki.jp, will warm up again next week...very slightly.
Posted by Unknown at 4:58 PM No comments:

this is FINALS WEEK

trying to write final papers on top of overwhelming feelings of anticipatory sadness is difficult.

figuring out what topic to write on the night before the paper is due was a bad, bad idea.

a note to future KGU exchange students: do as much of your work as you can, as early as possible.

Posted by Unknown at 8:16 AM No comments: